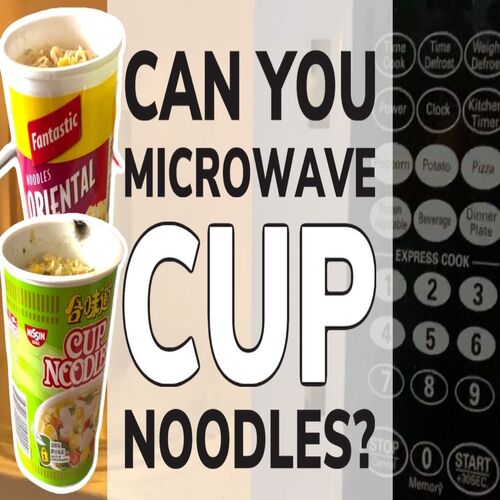 Cup noodles can be a quick and delicious snack, and I personally love to have one every once in a while. Some people like to put them in boiling water while others put them in the microwave to warm them up. Can you microwave cup noodle?

However, some noodle cups come with a warning warning you not to use them in the microwave. So what’s the deal? Can you microwave noodles and if not why shouldn’t you?

I wanted to try this out for myself, so I ran an experiment of my own. I also wanted to do my own research and see if there are any potentially negative health outcomes associated with microwaving a cup of noodles in a Styrofoam or plastic container.

We’ll talk more about this in the health section, but first let’s see if anything bad or explosive happens if you microwave cup noodles.

What happens when you cook cup noodles in the microwave?

None of the noodle cups tell me to microwave them so I rarely do. But I wanted to put this to the test and see what would happen.

So I went and bought 2 cup noodles to try. One was in a styrofoam cup and the other was in a paper covered plastic cup with a foil lid.

I placed them in the microwave to see what would happen. Amazingly the foil lid sizzled and almost caught fire!

In the experiment you can see that the water in the noodle cup gets hot as soon as it is in the microwave.

I did 2 minutes and brought the water to about 170ºF (77ºC) which was probably hot enough. However, you would need to let the noodles sit for another 5-10 minutes or so to get them soft and cooked.

I had a moment where the aluminum lid of the plastic noodle cup sizzled and created some burns on the cup.

So if you have an aluminum lid, be sure to remove it before microwaving.

Otherwise no major issues putting the noodle cups in the microwave for a couple of minutes.

You’re not going to blow up your microwave or set your house on fire.

However, many people worry whether microwaving cup noodles may be bad for your health or increase your chances of getting cancer.

Can microwaved cup noodles cause cancer? The Health Risks of Cups of Noodles

While you may not kill yourself by setting your house on fire, you’re very likely increasing your chances of getting cancer by using Styrofoam or plastic cups and putting hot water in them. 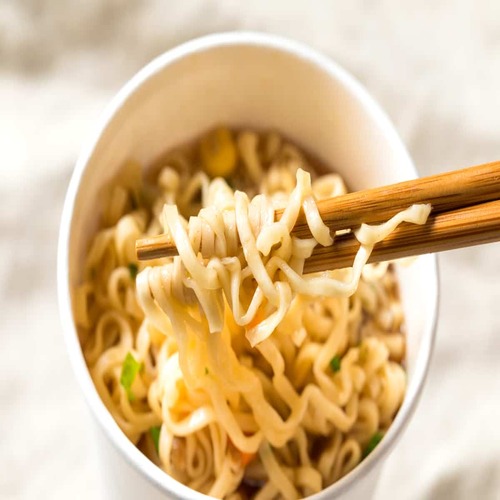 This medical paper demonstrated that styrene leached into water from Styrofoam cups and water bottles, and that temperature played a role in the amount of harmful chemical leaching that occurred.

The higher the temperature, the more leaching occurred!

Do I recommend the microwave cup noodles?

So after running the experiments and doing the research, do I recommend cooking cup noodles in the microwave? My answer is no.

I don’t recommend microwaving cup noodles, as both Styrofoam and plastic can leach harmful chemicals into food at high temperatures. Instead, place the cup noodles in a glass or ceramic microwave-safe bowl and cook them in the microwave or on the spot.

This adds a bit of complexity to things. One of the main benefits of cup noodles is that they are portable and disposable. 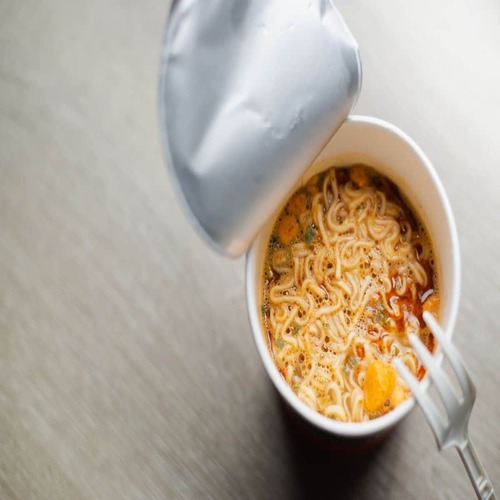 They come in the cup you need for cooking and eating, which makes them really easy to make.

Having to transfer them to a glass bowl or glass is annoying and may not be feasible in all circumstances.

Personally, I don’t think I’ll ever eat out of a cup noodle again. Why risk health?

If you can avoid them, do so, but if you can’t avoid them, limit your use of plastic cups and Styrofoam as much as possible.

Ultimately what you do and whether to microwave your or put boiling water in your cup of noodles is up to you. Hopefully you are now a bit more educated so you can make a more informed decision.